So I got a tattoo.

In April this year, the word I’d written in Sharpie on my wrist for two years was etched into my skin. Became a part of me. It was kind of a spiritual experience.

A couple of my friends from CleanPlace, the writer’s forum I joined in 2009, did a lot of growing recently. One of them had been writing “love” on her wrist for four years, inspired by To Write Love On Her Arms and suicide prevention. 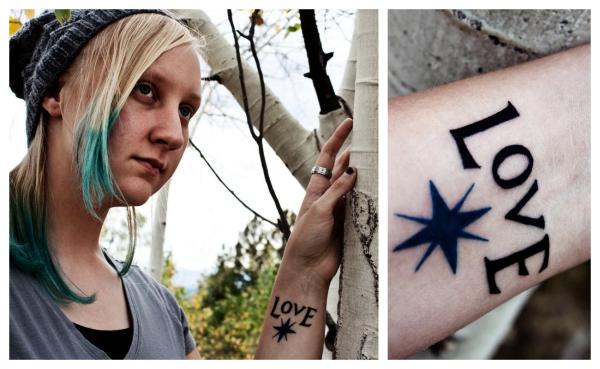 Another one hated herself, despised her name. She begged God to give her a new name, and she heard a name: Glory.

And they marked these revelations on their bodies, etched them permanently. They didn’t want to slip back into those old patterns of self-loathing, they wanted something to mark their healing.

In both Jewish and pagan tradition, people used stones to mark significant events, like this:

The stones were supposed to prompt questions.

Ray VanderLaan, who studies Jewish culture and archeology, explains to his Israel tour group: “Anybody who walked by and saw them could say ‘Woah, what happened here?’ And you could say, ‘Let me tell you what God did.'”

And I think that’s what my friends and I wanted. A sort of living memorial.

I used to believe that any body modification would damage my body as a temple of God when I was a fundamentalist. Then I pierced my ears for the first time in May 2014.

I’d read the verses in Leviticus about not tattooing yourself for the dead, but the context was 1) for the dead and 2) that’s Old Testament regulations anyway, which don’t apply under the new covenant.

There’s another practice in the Old Testament that interested me: piercing the ears of a slave who asked to be a bondservant for life. Because they chose it, because it wasn’t forced loyalty.

I don’t want to leave Christianity.

I’m just tired of watching people distort and manipulate something beautiful to me until it’s monstrous. I wanted a living standing stone, I wanted to mark myself as part of this journey for life.

So back to the word: ἄφες.

That one word encapsulates over 30 nuances of meaning in two syllables: “to send forth, yield up, to expire, to let go, let alone, let be. To let go, give up a debt, forgive, to remit, to give up, keep no longer. To permit, allow, not to hinder, to give up a thing to a person.”

Jesus uses this same word for “let the little children come to me” and “Father, forgive them, for they know not what they do.”

You know that scene in the Passion of the Christ where they’re nailing his hands, and like, /while/ they’re doing it, he’s saying that? (Not before, not after, but during?) And the soundtrack crescendos in the background?

It sounds like a release… like some sort of freedom within pain… and it seemed very different from repression.

When I first saw the movie in fall 2012 after moving out, I was like, “I am going to find out what that word is in Greek,” and I did. And I learned ἄφες means “to let go, to release.”

Much different than how churches taught me “forgiveness,” which is more like burying the hurt, or feeling guilty about being angry about it.

It’s letting go when /you’re/ ready to, and it frees you, it lets YOU be your own person. Like, we were always told forgiveness was the answer?

But we also always had to forgive instantly and never harbor resentment ever because 1.) Jesus clearly suffered worse than you ever could! Why can’t you forgive? (because you’ve never been tortured or crucified) and 2.) the faster you forgave, the more Christian you were.

But this, this thing I saw in the film, is way, way different. There’s no obligation or guilt involved.

So I marked it on my wrist, this word that spoke life to me.

Thanks to my friend Sam, who gave me a gift certificate to Pens and Needles.

A Roadtrip. A Tattoo. A Damn Good Story.