So here’s my Harvey update finally.

My coworkers and I worked for nearly 18 days straight during the hurricane and the flooding, and I wasn’t able to post sooner.

The rain started on Friday, August, 25.

The eye of the storm passed over me on Tuesday evening, August 29.

I’d been getting up every few hours each night checking water levels since Sunday when the water had reached the curbs.

I lost internet in the afternoon and power around midnight.

On the last TV broadcast I watched, a local county judge said that our current drainage system couldn’t hold another 10-15 inches that had just been predicted by the National Weather Service.

We didn’t get quite that much, but the neighborhood just north of my apartments flooded.

That next morning, I could still drive my little car safely through the water and I got pictures of boat rescues just a few blocks north of me.

Then I went home to try to sleep since the wind and rain had finally stopped.

I woke up out of a sound sleep two hours later to the Beaumont Fire Department knocking on my door.

They explained that they were conducting a voluntary evacuation. I opened the front door and saw the water in the parking lot was coming up to the curbs again.

They didn’t know if the water would continue to rise during the night and they didn’t want to leave us without power and limited cell signal.

I told them that I’d come if they’d take my two cats.

My neighbors and I pulled our cars up onto the grass before leaving because the water in the street was knee deep.

I grabbed my suitcase and shoulder bag with my laptop, camera, and other work papers while the firemen waded through the water, carrying my cats in their carriers.

The firefighters loaded me and my two cats into the back of a city of Beaumont dump truck using a ladder.

At the main street, we transferred into a school bus and collected other people from temporary shelters, many of them elderly people on oxygen.

They took us down to a shelter in at the university, but it was full.

By this time, three people from my church’s home group were blowing up my phone. They said they knew I wanted to be strong and independent and do my journalism thing, but they weren’t letting me spend the night in a shelter.

I spent the night with them and had to bathe one of my cats because he peed on himself during the bus ride.

Then the city of Beaumont lost water supply due to a pump failure early in the morning of August 31. Happy birthday to me, haha.

The family that I was staying with evacuated to Lake Charles with their tiny humans and I stayed behind to work and take care of their dog and my cats.

That night, people filled up buckets of water at the riverfront to flush their toilets. I felt like my city had very quickly become part of a third world country.

The water receded so that I could drive my car out of the parking lot on Sept. 2, and then power and internet were restored to my apartment complex on Sept. 7, because one of the power company’s substations had flooded.

My kitties and I came back home on Sept. 8.

There are so many stories I could tell you about Hurricane Harvey.

There were two times that I nearly cried.

The first time was the Muslim nurse in full hijab. I was taking photos as she was rescued from her flooded house on a boat, asking passersby for a ride to the hospital.

“I have to get to work, I need to save people,” she said. 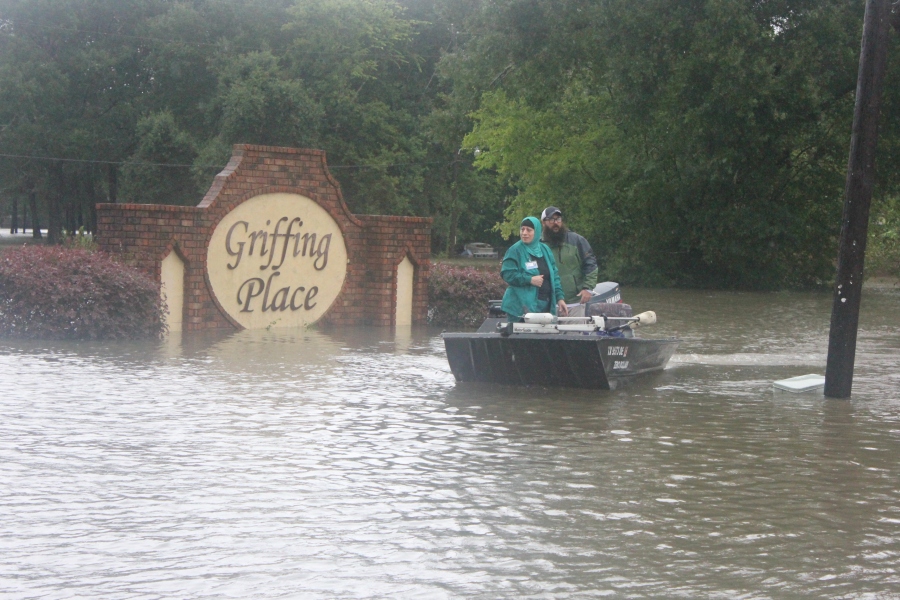 Then there was the elderly man outside Walmart one night. The store closed an hour before due to the storm, but he was pounding on the glass.

“I just need water, please give me water,” he said.

I ran over to him with a bottle and handed it to him. I couldn’t just let him drive away.

There are so many stories that I want to tell that came out of this, and there will be many more stories as we get back to normal.

My church people and I gave out water and mud out flooded houses. My pastor likes to say that “we’re in this for the long haul.” The plan is to help local people without insurance rebuild their homes.

We are #409Strong. Just like after the most destructive wildfires in Colorado’s state history back in 2012 and 2013, we were #ColoradoStrong.

For everyone who has been asking how to donate to relief efforts, my church served as a distribution site last week for food, water, supplies and diapers and now they’ve transitioned to being a staging area for mud out teams.

Their website has a sections for volunteers, applying for help, or donating to the Hurricane Harvey Relief Fund on their homepage over here.

Also, my best friend Keri has organized a list of charities that she’s researched.