So last summer I read this book called Cameras in Narnia: How the Lion, the Witch, and the Wardrobe Came to Life. I’m getting ready to mail the book back to the friend I borrowed it from, so I skimmed it again.

The author gives an inside perspective since he was on set for almost the entire filming process, and I enjoy reading about how movies are made.

I learned that work on the movie started in 2002, and the director used pre-visualization to plan shoots, especially scenes like battle sequences. The White Witch’s ice castle was constructed of Styrofoam, and the wardrobe was specifically carved for the set.

Andrew Adamson, the director, said that learning filmmaking in New Zealand is nearly impossible. They don’t really have degree plans for it. He left in 1991 to pursue filmmaking as a career, but most of the outdoor scenes in the world of Narnia were filmed in his homeland.

While I was reading, I remembered an article I saw years ago, condemning the movie’s release. The film came out in theaters in December 2005, but I didn’t see it until the next spring because my dad was skeptical of most fantasy and my mom was concerned that the adaptation wouldn’t be faithful to the book.

One of my dad’s older sisters called us and asked my mom if she’d heard of this new series called Narnia because she was worried about my siblings and I reading it. My mom told her that the books were in print back when she was a child, but there was a new movie out.

My aunt mailed us a Southwest Radio Bible Church article called “The Chronicles of Narnia: Christian Entertainment or Indoctrination in Evil?” The piece was published in the January 2006 issue of The Prophetic Observer. I also had friends in my fundamentalist church’s youth group around the same time who weren’t allowed to read Narnia.

It’s such a hilarious example of extreme Christian fundamentalism and awful argumentation that I’m going to break it down into sections and provide commentary. Here’s the full text if you want to read it all at once. 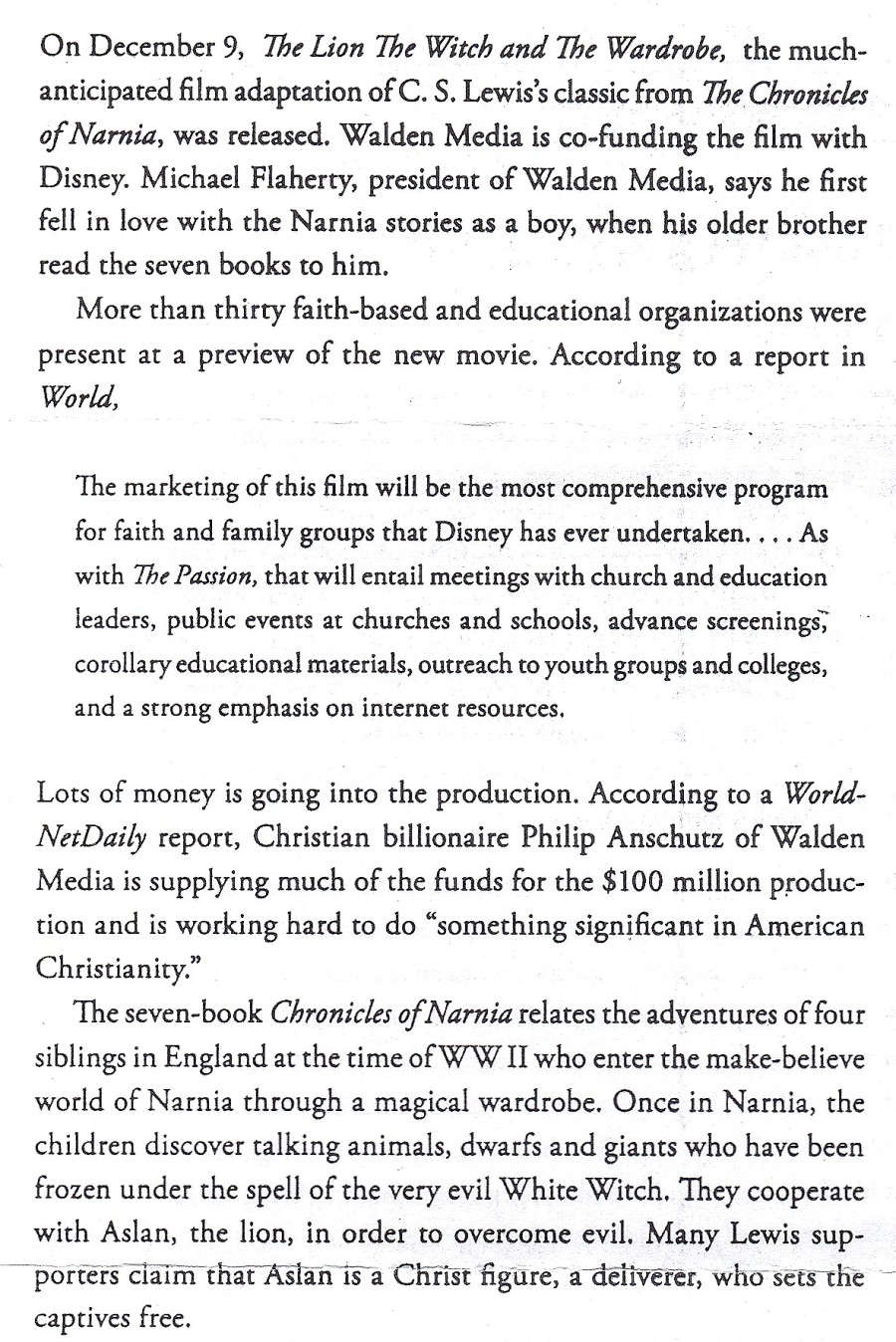 So first off, Dr. Larry Spargimino gives us an info dump on the film’s background.

I think he’s assuming that his audience will be automatically suspicious because Disney is producing the film. Then he starts using language to encourage doubts: “Many Lewis supporters claim that Aslan is a Christ figure, a deliverer, who sets the captives free.”

I think we’re supposed to assume that androgynous = automatically evil because gender roles. Spargimino doesn’t seem to understand that androgyny is a biological thing.

However, he never actually explains what he’s getting at here. He just moves on and gives another info dump, this time from Lewis’ biography. 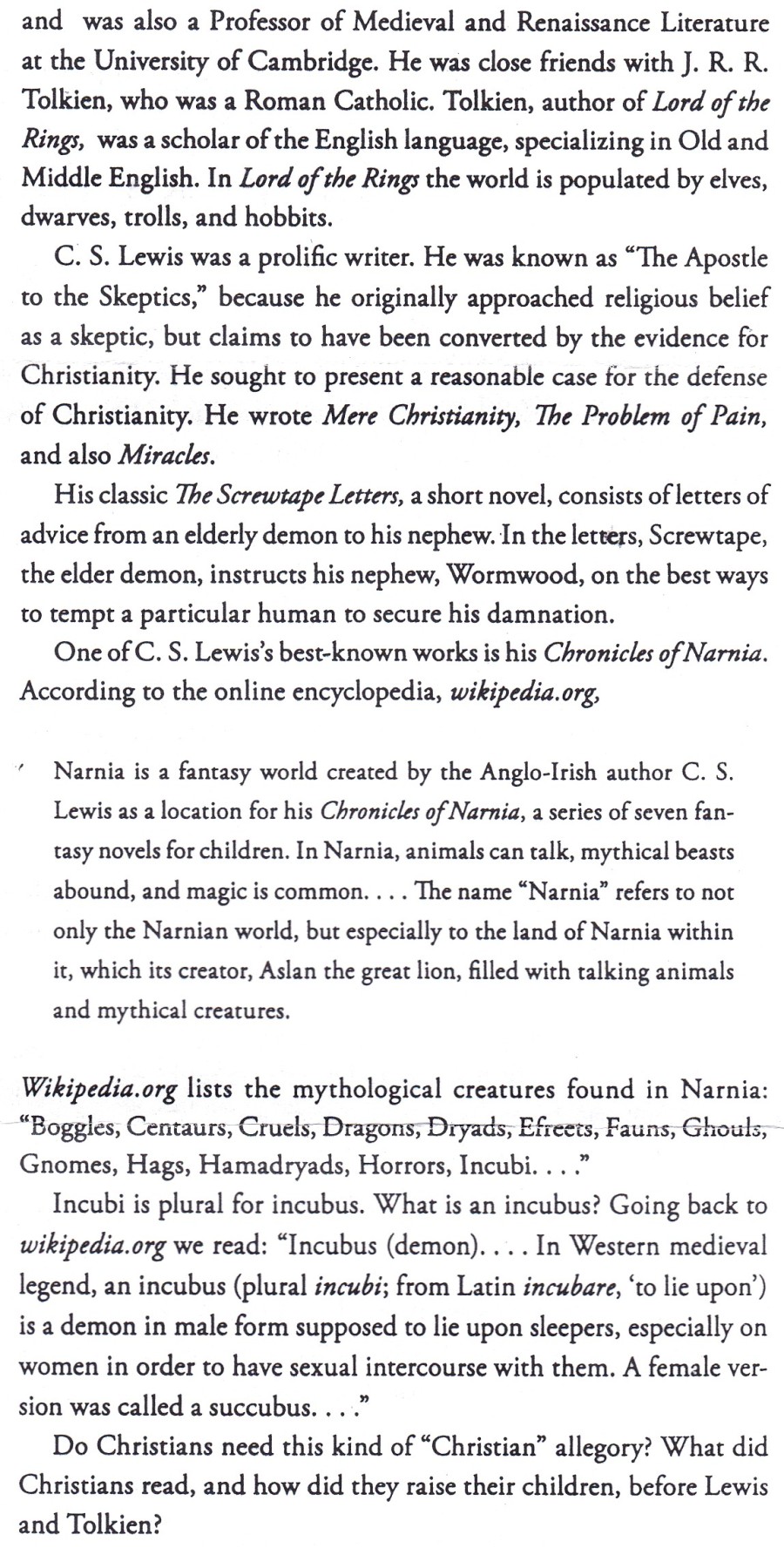 Apparently he doesn’t understand this isn’t an acceptable source for your college papers. His other citations so far have all been conservative news websites like World magazine or World Net Daily and then Focus on the Family’s Radio Theater website. Pretty sure this means Dr. Larry’s only research for this article was a Google search.

I’m guessing that we’re supposed to think Lewis wouldn’t have been friends with Tolkien if he had been a Real Christian™. Dr. Larry doesn’t seem to think Lewis was a Christian because he says “he claims to have been converted by the evidence for Christianity.”

Also, Lewis wrote a book about demons. We aren’t told why he wrote about demons, just that he wrote about them. Then the article jumps to explaining why incubi are evil. Spargimino gives us another random definition and expects us to form our own conclusions, with little context.

Nevermind that incubi were one of the White Witch’s henchmen. Nevermind that they killed Aslan. Nope, the whole book is bad because incubi are in it.

Here’s where incubi are mentioned in the text:

A great crowd of people were standing all round the Stone Table and though the moon was shining many of them carried torches which burned with evil-looking red flames and black smoke. But such people! Ogres with monstrous teeth, and wolves, and bull-headed men; spirits of evil trees and poisonous plants; and other creatures whom I won’t describe because if I did the grownups would probably not let you read this book – Cruels and Hags and Incubuses, Wraiths, Horrors, Efreets, Sprites, Orknies, Wooses, and Ettins. In fact here were all those who were on the Witch’s side and whom the Wolf had summoned at her command. And right in the middle, standing by the Table, was the Witch herself.

– The Lion, The Witch, and the Wardrobe, Chapter 14

In context, the incubi make sense. Out of context, the definition given would horrify most parents reading this article. So when Dr. Larry asks if Christians need this kind of “Christian” allegory, his audience is already mentally answering with a resounding no.

Once again, Dr. Larry is citing disreputable sources again. Geocities was a free Yahoo webhosting service that shut down in 2009. Geocities was known for being kind of awful.

Now the audience is supposed to be upset that Lewis is explaining truth with mythological characters because “we wonder if the blurring of reality and fantasy is really the way to go.” Why? Because Scripture!

Since fundamentalists believe nothing is missing in Scripture, which is supposed to fulfill every human need, then their answer to Spargimino’s question is no. Therefore, Narnia is not something our children need to read. Furthermore, they could be harmed by reading these books or watching this movie. Therefore, we will not allow our children to read these books.

This is how fundamentalist logic works. It’s sad and it’s incredibly limiting.

The same reasoning used in this article was used to keep us from reading Harry Potter or any other entertainment that could be suspicious.

It’s fear tactics. Dr. Larry Spargimino never actually comes out and explains that this is why Narnia is evil, he just hints and plants doubts in the minds of an already indoctrinated audience. They’ll end up convincing themselves that it’s something to avoid.

If this guy was writing a paper for a college English course, he’d get marked off for not explaining what his quotes and sources mean, for not clarifying what he’s actually trying to say. But since he’s a fundamentalist radio preacher, he can get away with it.

When you encounter conservative Christians bemoaning the release of a new book or movie as the new worst thing ever, look for this type of thinking. It’s common.

One thought on “Narnia is evil. Because scripture.”