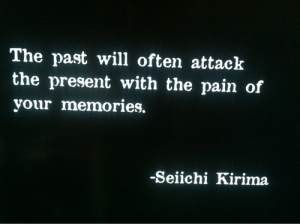 I’ve never been good at saying goodbye
But everyday I wake up, and I try
I’m haunted by memory, of things I can’t say
They’re changing me…
– Secrets in Stereo, Starting to Rain

They say your past will have ghosts.

I didn’t really know what that meant until this year. Growing up isolated, I found my first friends in high school and college.

I value honesty and vulnerability, and I’d never understood why some people shied away from it. Now I know they were burned.

But I have more scars now.

My dad used to tell me to be less open, because people would take advantage of me. I think I understand now why he liked to make his house a castle and draw up the moat when he got home from work.

Humans wound each other, whether or not we mean to. The sting lingers. And when your heart is bleeding, you want something to tourniquet it.

I’ve been seeking control over my hurts. I watch my relationships to see if I could predict emotions like a meterologist, looking for a shift in my friends’ glances, listening for the knife in a off-hand comment.

I look for safety through analyzing subtleties because my ability to trust is broken.

If I prophesy pain, it hurts less.

Family did things I’d thought impossible, friends became uncomfortable with my activism. Few seem to accept me for who I am.

I’m caught between giving the ones I love space and permission to hate me when I caused them pain, and not allowing them to mistreat me.

And the line is blurry right now.

This year, I trusted someone who was in so much pain herself that she was going to hurt others. It just happened to be me.

Her words stopped giving perspective and clarity and instead, morphed into an attack on my identity.

I don’t know how to see you in terms of equality. On a very regular basis, I ask myself why I bother with you, and I’m like, “she’s really smart and I want a smart person in my life.”
…
I’ve always felt obligated to talk to you.
…
You avoid people because you’re unstable and annoying.
…
I kind of put up with you most of the time. I literally talk to you because it makes me feel good to help people.
…
I’ve used you all, and I’ve hurt you all by growing up.

I thought she was my friend. I didn’t know she viewed me as an object, something to mold.

My brain has this terrible flaw of rewinding her words like an echo, and I wonder if they’re true.

I’m shifting again, seeking the shards of myself in murky waters. Wondering if there are humans who will view me as more than just a home improvement project.

But I won’t be ruled by fear.

I will protect myself, but I must stop looking for who is going to stab me next, because life is about laughter and love and spontaneity, not waiting to be someone else’s victim.

Why should I watch for betrayal that may never come?

Maybe today I will trust.

One thought on “Haunted by memory”