But as the survey conducted by Homeschool Alumni Reaching Out (HARO) a few days ago demonstrates, she is not alone. And the majority of survey respondents whose parents denied them their identifying documentation were also Homeschool Legal Defense Association (HSLDA) members, which is an interesting correlation.

When my parents gave me an ultimatum between moving out and transferring colleges to Bob Jones University summer 2012, I left with only my driver’s license.

Earlier that year or year before, my mom gave me a folder marked “Eleanor.” She kept one for me and each of my siblings. It had everything from baby footprints and my birth certificate to my social security card and passport to x-rays and health records for my growth hormone treatment as an adolescent.

But the Waldo Canyon Fire started one sleepy Saturday in June 2012. By the next Tuesday, the winds rolled it down the mountain into the city, destroying around 300 homes, and my family and neighbors were planning to evacuate.

My dad took the folder for safekeeping in a safe deposit box. I reminded him I would need it later.

Before and after moving out, I asked for that folder and my documentation over and over. I applied for jobs off-campus for additional income, but could only provide my drivers’ license for the I-9, which wasn’t enough.

Mom finally gave me a few Xerox copies of my social security card and passport. But not before I’d already been denied one tutoring job after an interview because I couldn’t produce proper identification.

They kept telling me they were holding my documentation in safekeeping for when I changed my mind and decided to go to Bob Jones.

Around four to six months after moving out, they finally gave me my social security card.

I continued asking for my passport.

Text messages from 11/17/2013:
Me: May I please pretty please have my passport?
Mom: Passport applications are available at the post office. […] I will continue to pray for you. Goodbye.

Later, my dad said I had to repay debt before he would give me my passport. I didn’t receive my passport until October 2014.

So this week, the Help Me Prove It campaign reminded me that I still don’t have my birth certificate or health records.

I emailed my parents two days ago.

Have not seen your BC for quite some time. Your best bet there is to contact Jefferson County in Texas. They can likely give you a copy. Very busy these days. Best regards, TS

Mom answered the next day:

Dad and I had to request birth certificates when we first applied for passports.  It was not something that Grandma PZ or Gram had.  We wrote Harris County and Duchess County for our birth certificates.  You won’t need one to renew your driver’s license.  Just proof of address and take the eye test.  Mom.

No answer about my health records.

At least I’m registered in the state system, so I can get another birth certificate if I need to get a driver’s license in another state, and I can request copies of my health records from my doctors. Alecia Pennington can’t.

So yes, some of us who moved out years ago are still fighting for our documentation. 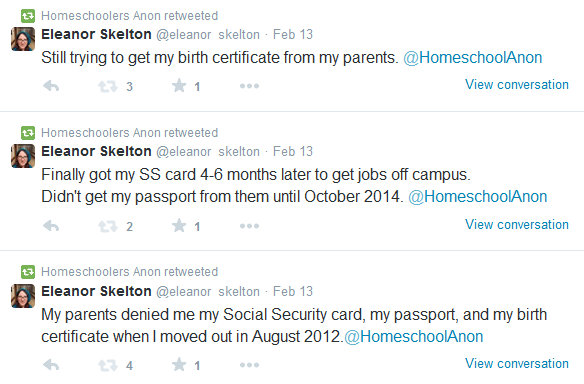 13 thoughts on “Alecia Pennington, you are not alone”