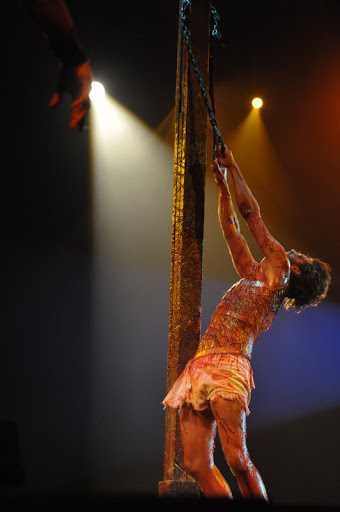 Last spring, my friend Luke from the group of awesome online writers I hang out with shared a quote on Facebook that has haunted me, floating in and out of my daily conversations.

“Rebuke no one, revile no one, not even those who live very wickedly. Spread your cloak over those who fall into sin, each and every one, and shield them. And if you cannot take the fault on yourself and accept punishment in their place, do not destroy their character.” – St. Isaac the Syrian

I don’t usually have a problem with forgiving people who hurt me – but I can’t stand people hurting those whom I love.

Not long ago, I learned that a classmate had hurt two of my good friends. A vinegar-like disgust consumed me. The act was pre-meditated, calculated to deal as much pain as possible. My stomach sickened.

But the question remained. Could I take the fall for that hatred? Would I accept the consequences for it with silence and surrender?  Did I dare answer?

Another question, almost as difficult. Does the church today focus more on loving God and people…or on theological and political issues? What if the church was less concerned with how the world is offending God and more focused on loving the people they believe He died for? Now wait. I’m not advocating that ethics and morality be abandoned. But I do argue that priorities need to be shifted.

At the Palm Sunday service I attended, the pastor posed a similar question and then said that the world has already thrown its very worst at Jesus, but He won anyway. So, should we be “defending God” against offenses? Does He actually need our defending? Somehow, this approach rings hollow, lacking, and actually drives people away from the God we claim to defend.

Perhaps we tell ourselves it is because we love Him. It is only natural to defend what you love. The mockery of a beloved is a kick in the gut. My roommate Ducky and I both had a reflexive reaction at this year’s production of The Thorn. During the scene in which Jesus is being scourged, we shared an anger for the Roman soldiers, still aware that they were just actors. My little girl heart always wants to run to Jesus, wrap my arms around his bare back, protect him from the lash. To stop the bleeding.

But I can’t. As Ducky says, the worst pain is in “knowing that you couldn’t stop it.”  In the same way, I can’t actually defend God.

Another thought. I wonder if the church is more offended for Christ than He is, since He has forgiven the offense before it happens.

As John the Beloved, one of the disciples narrating the Thorn, says, “He doesn’t ask you to be perfect. He just asks you to be yourself and to love Him.” The essence of following Christ, because in loving Him, we will love like Him.

P.S. My friend MOTS also expressed this idea in a vlog of hers last year.